Parts of All of Us

Two of the characters named Sniff and Scurry are mice. They represent parts of us that are simple and instinctive. Hem and Haw are the little people, representing those complex parts of us as human beings. Sometimes we are like Sniff, who anticipates change early by sniffing it out, or Scurry, who quickly scurries into action and adapts. Maybe we are more like Hem, who denies change and resists it out of fear, or Haw, who learns to adapt in time when he sees something better. Whatever part of us we choose, we all share the common need to find our way in the maze of life and succeed in changing times.

Wisdom in a Nutshell from Who Moved My Cheese?

• Anticipate change.
• Adapt quickly.
• Enjoy change.
• Be ready to change quickly, again and again.
• Having Cheese makes you happy.
• The more important your Cheese is to you, the more you want to hold on to it.
• If you do not change, you can become extinct.
• Ask yourself “What would I do if I weren’t afraid?”
• Smell the Cheese often so you know when it is getting old.
• Movement in a new direction helps you find New Cheese.
• When you move beyond your fear, you feel free.
• Imagining myself enjoying New Cheese, even before I find it, leads me to it.
• The quicker you let go of old cheese, the sooner you find New Cheese.
• It is safer to search in the maze than remain in a cheeseless situation.
• Old beliefs do not lead you to New Cheese.
• When you see that you can find and enjoy New Cheese, you change course.
• Noticing small changes early helps you adapt to the bigger changes that are to come.
• Read the Handwriting on the Wall
• Change happens. They keep moving the Cheese.
• Move with the Cheese and enjoy it!

The Story Behind the Story

Kenneth Blanchard, Ph.D. relates how the Cheese story has made a difference in the lives of many people all over the world. This simple parable has been credited with saving careers, marriages, and lives! NBC-TV Olympic broadcaster Charlie Jones heard the story and it helped him overcome his anger about being transferred from his usual Track and Field assignment to Swimming and Diving, where he had little experience. He realized his boss had “moved his cheese”, so he adapted, learned the two new sports, and in the process, found that doing something new made him feel young.

His boss soon recognized his new attitude and energy, and gave him better assignments. Charlie went on to enjoy more success and was inducted into the Pro Football Hall of Fame Broadcaster’s Alley.

One sunny Sunday in Chicago, a group of former classmates gathered for lunch to catch up on each other’s lives, having attended their high school reunion the night before. The topic came around to change, and how each person experienced it. Michael tells the group The Story.

Who Moved My Cheese?

Everyday Hem, Haw, Sniff, and Scurry went about their business collecting and eating cheese. Every morning, the mice and little men put on their jogging suits and running shoes, left their homes, and raced around the maze looking for their favorite Cheese.

Sniff and Scurry woke up early everyday, always following the same route. The mice would arrive at the station, tie their running shoes together, and hang them around their necks so they could get to them quickly whenever they needed to.

Hem and Haw followed the same routine for a while, but later on, they awoke a little later each day, dressed slower, and walked to Station C, always assuming there would be Cheese waiting for them. In fact, the little people put away their running shoes, and grew very comfortable in Station C. Later, this over-confidence turned into arrogance.

The mice, on the other hand, always inspected the area, and noticed the Cheese supply was getting smaller every day.

One morning they discovered there was no more cheese. The mice did not overanalyze things, they knew it was coming, so they simply untied their running shoes from their necks and put them on. The mice wasted no time and immediately ventured into the maze in search of New Cheese.

Hem and Haw arrived later, and having taken their Cheese for granted, they were surprised to find there was no more cheese. Hem yelled, “Who moved my Cheese?”

After much whining, Haw suggested,
MAYBE WE SHOULD JUST STOP ANALYZING THE SITUATION SO MUCH
AND JUST GET GOING AND FIND SOME NEW CHEESE.

While Hem and Haw were wasting time fretting over their situation, Sniff and Scurry had already found a great supply of New Cheese at Cheese Station N.

Haw began to imagine himself tasting and enjoying New Cheese. Hem refused to leave Cheese Station C. Haw also began to realize his fear was keeping him from leaving Hem and going back into the maze. He painted a picture in his mind of himself venturing out into the maze and eventually finding New Cheese.

Haw was in the habit of writing thoughts on the wall for Hem to read. Before leaving he wrote, “If you do not change, you become extinct.” Haw would write thoughts like these every now and then as he went about the maze, hoping Hem would venture out of Station C and read the handwriting on the wall.

Haw found a little cheese here and there. As he moved through the maze, he learned several things for himself:

* He needed to let go of his fears.
* He realized what lies out there could be a lot better, not worse.
* He should be alert in order to anticipate change, and next time, periodically smell the cheese to check if it is getting old.

And to learn these important lessons he had to tell himself:
GET OUT OF YOUR COMFORT ZONE.

He found a cheese station but it was empty. He realized that if he had moved sooner, he would have very likely found a good deal of New Cheese here. So he wrote on the wall:

• The quicker you let go of old cheese, the sooner you find New Cheese.

Haw went back to the cheeseless station to offer Hem some bits of Cheese he had picked up along the way. Hem turned it down because he wanted the cheese he was used to. Haw went back into the maze.

• The fear you let build up in your mind is worse than the situation that actually exists.

WHAT YOU ARE AFRAID OF IS NEVER AS BAD AS WHAT YOU IMAGINE.

Haw soon found New Cheese at Station N, and met up with his old friends Sniff and Scurry who looked like they had been there for quite some time because they had grown fat.

Haw reflected as he enjoyed his New Cheese. He realized many more things:

* He had been holding onto the illusion of Old Cheese that was no longer there.
* He had started to change as soon as he learned to laugh at his own mistakes, then he was able to let go and move on.
* Sniff and Scurry kept life simple. They didn’t overanalyze or overcomplicate things. They simply moved with the Cheese.
* The mistakes he made in the past can be used to plan for the future.
* Notice the little changes so you are better prepared for the big change that might be coming.
* The biggest inhibitor of change lies within yourself. Nothing gets better until You change.

THERE IS ALWAYS NEW CHEESE OUT THERE.

While Haw still had a supply of cheese, he often went out and explored new areas in order to stay in touch with what was happening around him. He knew it was safer to be aware of his real choices than to isolate himself in his comfort zone. 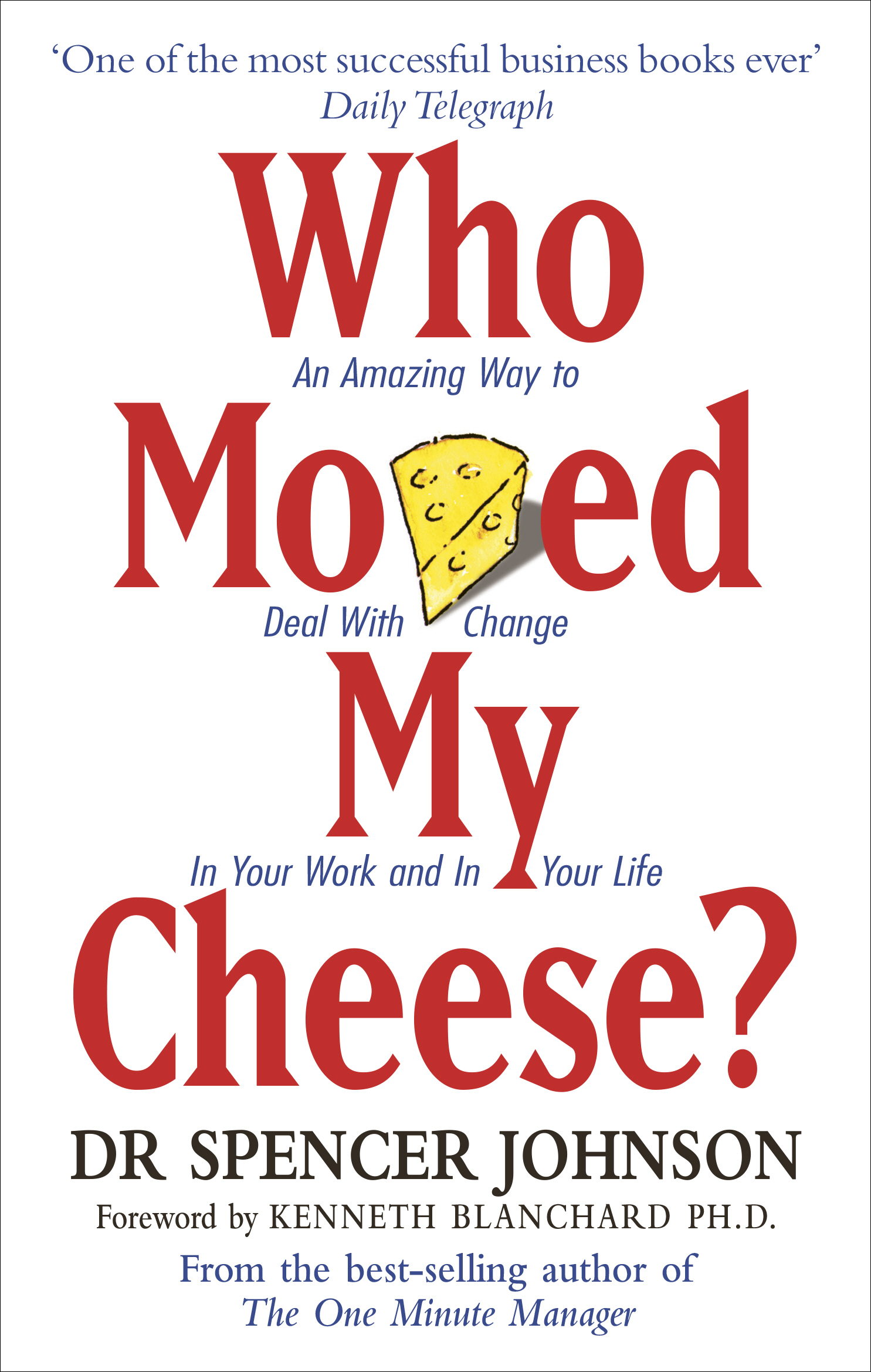