Empathy: Why It Matters, and How to Get It

If you think you’re hearing the word “empathy” everywhere, you’re right. It’s now on the lips of scientists and business leaders, education experts and political activists. But there is a vital question that few people ask: How can I expand my own empathic potential? Empathy is not just a way to extend the boundaries of your moral universe. According to new research, it’s a habit we can cultivate to improve the quality of our own lives.

The big buzz about empathy stems from a revolutionary shift in the science of how we understand human nature. The old view that we are essentially self-interested creatures is being nudged firmly to one side by evidence that we are also homo empathicus, wired for empathy, social cooperation, and mutual aid.

Over the last decade, neuroscientists have identified a 10-section “empathy circuit” in our brains which, if damaged, can curtail our ability to understand what other people are feeling. Evolutionary biologists like Frans de Waal have shown that we are social animals who have naturally evolved to care for each other, just like our primate cousins. And psychologists have revealed that we are primed for empathy by strong attachment relationships in the first two years of life.

But empathy doesn’t stop developing in childhood. We can nurture its growth throughout our lives—and we can use it as a radical force for social transformation. Research in sociology, psychology, history—and my own studies of empathic personalities over the past 10 years—reveals how we can make empathy an attitude and a part of our daily lives, and thus improve the lives of everyone around us. Here are the Six Habits of Highly Empathic People!

Highly empathic people (HEPs) have an insatiable curiosity about strangers. They will talk to the person sitting next to them on the bus, having retained that natural inquisitiveness we all had as children, but which society is so good at beating out of us. They find other people more interesting than themselves but are not out to interrogate them, respecting the advice of the oral historian Studs Terkel: “Don’t be an examiner, be the interested inquirer.”

Curiosity expands our empathy when we talk to people outside our usual social circle, encountering lives and worldviews very different from our own. Curiosity is good for us too: Happiness guru Martin Seligman identifies it as a key character strength that can enhance life satisfaction. And it is a useful cure for the chronic loneliness afflicting around one in three Americans.

Cultivating curiosity requires more than having a brief chat about the weather. Crucially, it tries to understand the world inside the head of the other person. We are confronted by strangers every day, like the heavily tattooed woman who delivers your mail or the new employee who always eats his lunch alone. Set yourself the challenge of having a conversation with one stranger every week. All it requires is courage.

We all have assumptions about others and use collective labels—e.g., “Muslim fundamentalist,” “welfare mom”—that prevent us from appeciating their individuality. HEPs challenge their own preconceptions and prejudices by searching for what they share with people rather than what divides them. An episode from the history of US race relations illustrates how this can happen.

Claiborne Paul Ellis was born into a poor white family in Durham, North Carolina, in 1927. Finding it hard to make ends meet working in a garage and believing African Americans were the cause of all his troubles, he followed his father’s footsteps and joined the Ku Klux Klan, eventually rising to the top position of Exalted Cyclops of his local KKK branch.

In 1971 he was invited—as a prominent local citizen—to a 10-day community meeting to tackle racial tensions in schools, and was chosen to head a steering committee with Ann Atwater, a black activist he despised. But working with her exploded his prejudices about African Americans. He saw that she shared the same problems of poverty as his own. “I was beginning to look at a black person, shake hands with him, and see him as a human being,” he recalled of his experience on the committee. “It was almost like bein’ born again.” On the final night of the meeting, he stood in front of a thousand people and tore up his Klan membership card.

Ellis later became a labor organiser for a union whose membership was 70 percent African American. He and Ann remained friends for the rest of their lives. There may be no better example of the power of empathy to overcome hatred and change our minds.

So you think ice climbing and hang-gliding are extreme sports? Then you need to try experiential empathy, the most challenging—and potentially rewarding—of them all. HEPs expand their empathy by gaining direct experience of other people’s lives, putting into practice the Native American proverb, “Walk a mile in another man’s moccasins before you criticize him.”

George Orwell is an inspiring model.  After several years as a colonial police officer in British Burma in the 1920s, Orwell returned to Britain determined to discover what life was like for those living on the social margins. “I wanted to submerge myself, to get right down among the oppressed,” he wrote. So he dressed up as a tramp with shabby shoes and coat, and lived on the streets of East London with beggars and vagabonds. The result, recorded in his book Down and Out in Paris and London, was a radical change in his beliefs, priorities, and relationships. He not only realized that homeless people are not “drunken scoundrels”—Orwell developed new friendships, shifted his views on inequality, and gathered some superb literary material. It was the greatest travel experience of his life. He realised that empathy doesn’t just make you good—it’s good for you, too.

We can each conduct our own experiments. If you are religiously observant, try a “God Swap,”  attending the services of faiths different from your own, including a meeting of Humanists. Or if you’re an atheist, try attending different churches! Spend your next vacation living and volunteering in a village in a developing country. Take the path favored by philosopher John Dewey, who said, “All genuine education comes about through experience.”

There are two traits required for being an empathic conversationalist.

One is to master the art of radical listening. “What is essential,” says Marshall Rosenberg, psychologist and founder of Non-Violent Communication (NVC), “is our ability to be present to what’s really going on within—to the unique feelings and needs a person is experiencing in that very moment.” HEPs listen hard to others and do all they can to grasp their emotional state and needs, whether it is a friend who has just been diagnosed with cancer or a spouse who is upset at them for working late yet again.

But listening is never enough. The second trait is to make ourselves vulnerable. Removing our masks and revealing our feelings to someone is vital for creating a strong empathic bond. Empathy is a two-way street that, at its best, is built upon mutual understanding—an exchange of our most important beliefs and experiences.

Organizations such as the Israeli-Palestinian Parents Circle put it all into practice by bringing together bereaved families from both sides of the conflict to meet, listen, and talk. Sharing stories about how their loved ones died enables families to realize that they share the same pain and the same blood, despite being on opposite sides of a political fence, and has helped to create one of the world’s most powerful grassroots peace-building movements.

We typically assume empathy happens at the level of individuals, but HEPs understand that empathy can also be a mass phenomenon that brings about fundamental social change.

Just think of the movements against slavery in the 18th and 19th centuries on both sides of the Atlantic. As journalist Adam Hochschild reminds us, “The abolitionists placed their hope not in sacred texts but human empathy,” doing all they could to get people to understand the very real suffering on the plantations and slave ships. Equally, the international trade union movement grew out of empathy between industrial workers united by their shared exploitation. The overwhelming public response to the Asian tsunami of 2004 emerged from a sense of empathic concern for the victims, whose plight was dramatically beamed into our homes on shaky video footage.

Empathy will most likely flower on a collective scale if its seeds are planted in our children.  That’s why HEPs support efforts such as Canada’s pioneering Roots of Empathy, the world’s most effective empathy teaching program, which has benefited over half a million school kids. Its unique curriculum centers on an infant, whose development children observe over time in order to learn emotional intelligence—and its results include significant declines in playground bullying and higher levels of academic achievement.

Beyond education, the big challenge is figuring out how social networking technology can harness the power of empathy to create mass political action. Twitter may have gotten people onto the streets for Occupy Wall Street and the Arab Spring, but can it convince us to care deeply about the suffering of distant strangers, whether they are drought-stricken farmers in Africa or future generations who will bear the brunt of our carbon-junkie lifestyles? This will only happen if social networks learn to spread not just information, but empathic connection.

A final trait of HEPs is that they do far more than empathize with the usual suspects. We tend to believe empathy should be reserved for those living on the social margins or who are suffering. This is necessary, but it is hardly enough.

We also need to empathize with people whose beliefs we don’t share or who may be “enemies” in some way. If you are a campaigner on global warming, for instance, it may be worth trying to step into the shoes of oil company executives—understanding their thinking and motivations—if you want to devise effective strategies to shift them towards developing renewable energy. A little of this “instrumental empathy” (sometimes known as “impact anthropology”) can go a long way.

Empathizing with adversaries is also a route to social tolerance. That was Gandhi’s thinking during the conflicts between Muslims and Hindus leading up to Indian independence in 1947, when he declared, “I am a Muslim! And a Hindu, and a Christian and a Jew.”

Organizations, too, should be ambitious with their empathic thinking. Bill Drayton, the renowned “father of social entrepreneurship,” believes that in an era of rapid technological change, mastering empathy is the key business survival skill because it underpins successful teamwork and leadership. His influential Ashoka Foundation has launched the Start Empathy initiative, which is taking its ideas to business leaders, politicians and educators worldwide.

The 20th century was the Age of Introspection, when self-help and therapy culture encouraged us to believe that the best way to understand who we are and how to live was to look inside ourselves. But it left us gazing at our own navels. The 21st century should become the Age of Empathy, when we discover ourselves not simply through self-reflection, but by becoming interested in the lives of others. We need empathy to create a new kind of revolution. Not an old-fashioned revolution built on new laws, institutions, or policies, but a radical revolution in human relationships. 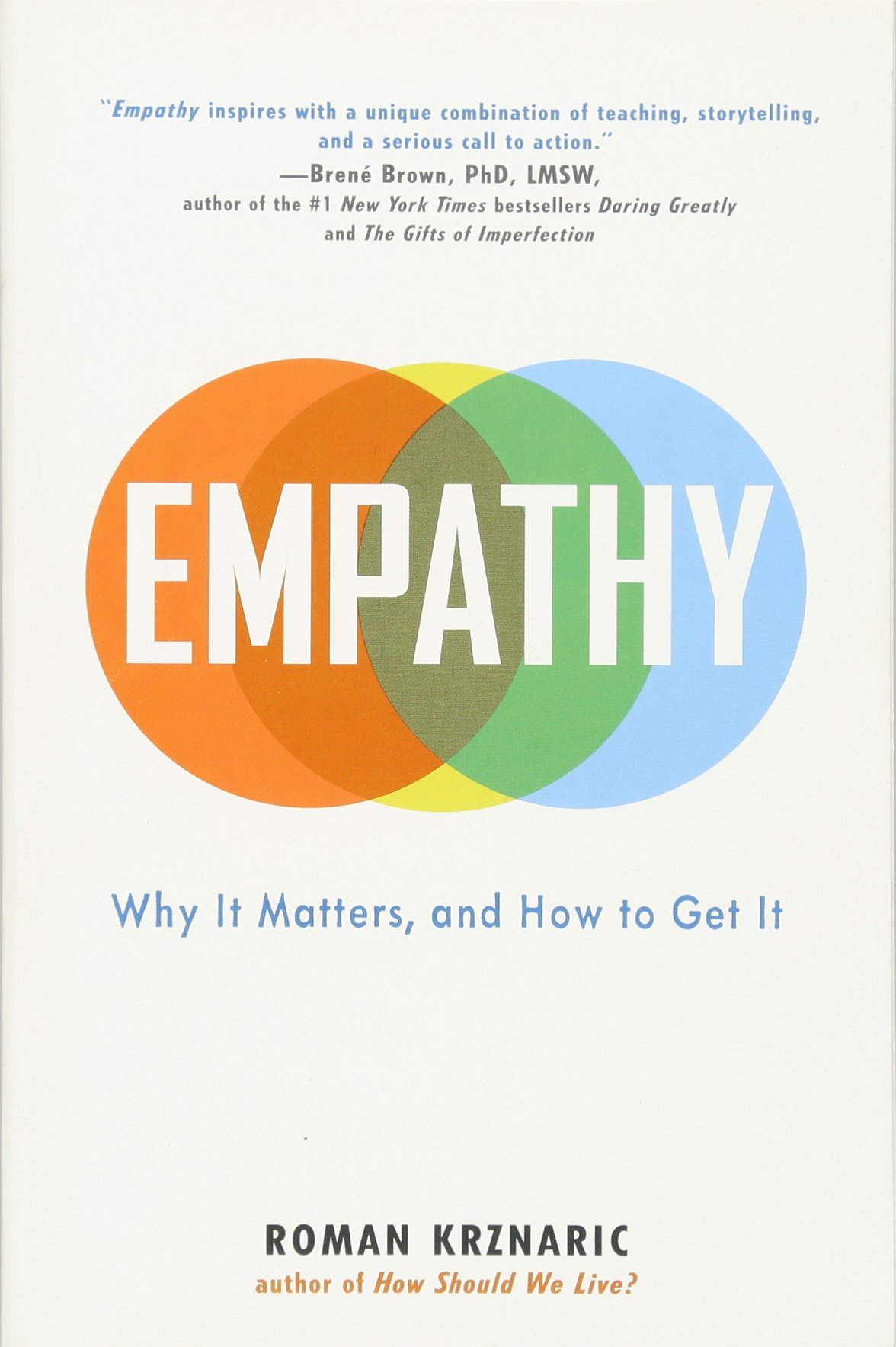