By Michael George Knight — 7 months ago

The Next Millionaire Next Door: Enduring Strategies for Building Wealth by Sarah Stanley Fallaw and Thomas J. Stanley

You may not be familiar with Dr. Sarah Stanley Fallaw, but you’ve probably heard of her dad, Dr. Thomas J. Stanley.

He was the author of one of most widely read financial books into the world, the Millionaire Next Door, which was the bestselling personal finance book back 25 years ago.

Sarah also knows a thing or two about the average millionaire as she’s surveyed over 4,000 of them.

She’s the president of DataPoints which helps advisers understand their client’s money mindset and published a follow-up to her father’s book titled, The Next Millionaire Next Door.

She read her dad’s book while attending college, but had no idea the importance of his work and what was going to happen with the book.

Who would have thought surveying a bunch of everyday people that turned into millionaires would become so popular?

At that time, very few books had accomplished the kind of research on the affluent that Stanley performed.

Not just the seemingly affluent, but those households who actually had a high net worth of $1 million or  more.

Some of the characteristics he found from these “everyday millionaires” included:

This is the exact OPPOSITE of how most doctors and other high-income earners live. Their main focus is trying to “keep up with the Joneses” with luxury houses and expensive cars leaving them with little to no savings.

They’re used to spending everything they earn and sometimes more.

The worse part of falling into this trap is that it’s a hard one to get out of.

Despite the evidence-based financial planning principles taught throughout The Millionaire Next Door, many people continue to ask, “Why am I not wealthy?”

Although it’s been over 25 years since the book was originally published, have things changed that much? Are the principles for wealth accumulation that much different now?

Unfortunately, in 2015, Dr. Stanley was killed by a drunk driver before completing research for a follow up book.

The good news is that Thomas Stanley’s daughter, Sarah, continued to carry on his work to bring their findings together in their book, The Next Millionaire Next Door.

Most of the book’s data was from a survey conducted of affluent Americans between 2015 and 2016.

Let’s take a look at what they found…

The Next Millionaire Next Door “The Sequel”

After the original book The Millionaire Next Door was published, there was some that stated the reason why these “everyday folk” turned into millionaires was due to the booming economy along with a host of other excuses.

One of the main reasons that Fallaw and her late father decided on a sequel was to see if there were lifestyle and behaviour changes noted in today’s millionaire households.

Here’s a few of their findings of what Today’s Millionaire looks like….

A Portrait of Today’s American Millionaires 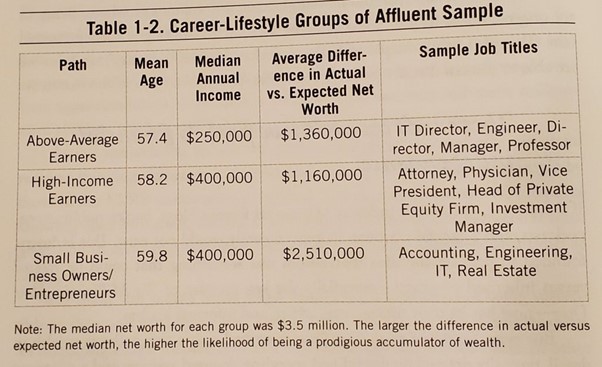 The majority of those reading this article fall into the high-income earner group. These individuals are often tempted to look “the part” of their colleagues by purchasing the “doctor” house, luxury automobiles and other expensive consumer goods. To them, status symbols rule their life.

To build wealth with a high income takes considerable discipline in the consumption arena. This is becoming increasingly harder as more than 70% of Americans are on social media and can be easily influenced by what others are doing or buying.

To have economically self-sufficient children, this group must apply and teach frugality.

One of the main differences between both books has to do with the rise of those that obtain side gigs in order to reach FIRE (Financial Independence Retire Early). It’s now much easier to have multiple sources of income than it was a decade ago.

With technological resources at your fingertips, anyone can create multiple businesses in a matter of minutes.

The Discipline of Wealth Building

In 2016, 91% of millionaires rated being disciplined as the most important success factor.

Specifically, discipline is required to take income and transform it into wealth (remember that income does NOT equal wealth).

More than 9 out of 10 of the top 5% high-income people in America reported that being well disciplined was very important in explaining their socioeconomic success. This finding is consistent over time.

From The Millionaire Mind, we’re reminded that “a disciplined person sets his sights on a lofty target, then figures out productive ways to reach it. Disciplined people aren’t easily sidetracked.”

Discipline often requires going against the tide, including the tide of your social influences, and perhaps even how you were raised or long-held beliefs about what you’re entitled to today.

America: Where Millionaires Are Still Self-Made

One of the most surprising aspects of The Millionaire Next Door was the finding that 80% of millionaires were self-made.

The same trend rang true after surveying the affluent for The Next Millionaire Next Door.

In Fallaw’s decades of surveying and studying millionaires, she has consistently found that 80-86% are self-made. That also applied to decamillionaires.

Even though economic opportunities continue to be huge in the U.S., most Americans don’t have much wealth. The main reason is they spend all or most of their income on liabilities or things that have little to no lasting value.

They lack the discipline (there’s that word again) required to accumulate wealth. Many American households are on a treadmill of working and consuming.

Our income, while statistically related to wealth, is NOT wealth. When we start to understand this (especially the high-income earner), we start seeing the criticality of our savings rate.

This rate is driven NOT by what we make but instead by what we do (how we consume and save).

It’s up to us to save more than we spend and live below our means. This is a mathematical truth in building wealth and financial success.

Once we understand that a lifestyle of consumption, one that’s more interested in appearing wealthy, is driving most Americans into a lifetime of dependency, work, and little economic freedom, we can begin to create an alternative plan for our lives.

As science has shown in almost all aspects of our lives, why we do what we do is a combination of our unique characteristics and how we were raised.

Growing up, we can’t choose where we come from, who our parents are, or what kind of early education we receive.

But as adults living in a society that doesn’t dictate our choices, we have the freedom to choose with whom and how we spend our time. These choices can influence our financial health and future.

Those who are financially independent focus on their own choices, taking responsibility for their money-related actions and behaviors.

Recent research shows that few other factors help shape how we save and spend money like our upbringing and our family’s influence.  Adult children who reported that their parents were frugal, discussed money-related matters, and demonstrated good money management skills were more likely to be prodigious accumulators of wealth compared to those who did not experience this same type of upbringing.

A vast majority of young people learn about a family’s propensity for saving and financial management through direct observation versus through conversations regarding these behaviors.

In other words, parent behaviors tend to stick with children more so than discussions of what ought to be done related to money. So, if you’re a parent then remember that your kids are watching you!

And action speaks LOUDER than words.

The Trouble with the Status of Doctors

There are approximately 650,000 physicians and surgeons in the United States and they’ve typically fallen into a stereotype of high-income earners who are challenged in building wealth.

In Fallaw’s research at her company DataPoints, the majority of physicians fall into the 33rd percentile or below on the assessment regarding frugality and financial acumen (measure of knowledge and expertise in investing and financial management).

Often, physicians’ median net worth is negative, due in most part to their student loans and age, but there’s something else at play: the adherence to the stereotype of doctor status.

In society, they’re expected to play their part.

The Next Millionaire Next Door created a helpful list to ensure households built wealth called:

Occupying Our Minds and Time

How we spend our time can either support our financial goals or detract from them.

Paws, those who are adept at transforming their income into wealth, spend considerably MORE time reading business articles and reading in general than their under accumulating peers, but perhaps it’s because our under accumulating friends are working more than the PAWs.

In Fallaw’s research, they noted that UAWs are spending MORE time on social media sites (14 hrs) as compared to PAWS (9hrs) per week. 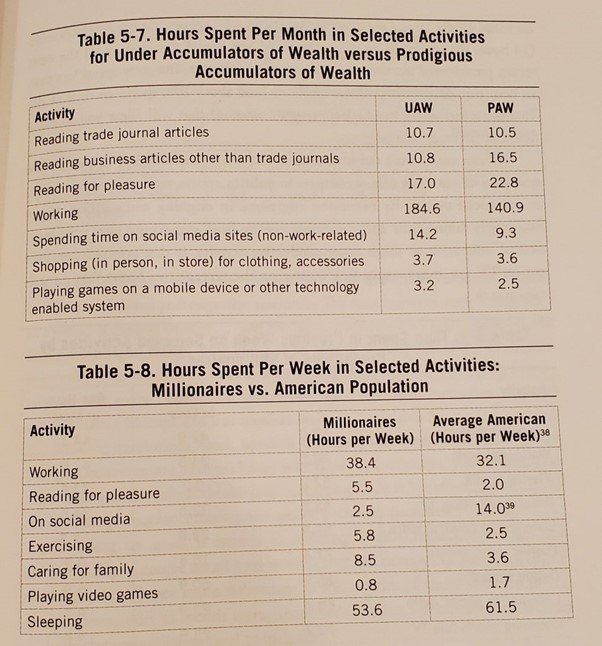 Consider any number of technological distractions today: From social media to texting to gaming, how many hours a day do YOU spend on your devices?

Distractions are a significant reason why many struggle to reach FI or achieve other goals. We know that the more we’re able to focus without distractions, the better we’re able to build true wealth long term.

How much time do today’s millionaires spend on the so-called “excitement” of the day? Most reported only spending 2.5 hours per week on social media vs the average American who spends almost 6x more (14 hours per week).

Similar to 1996 when The Millionaire Next Door was published, today it’s possible with an average to higher-than-average income, to become a millionaire through steady, prudent, disciplined financial management and regular income- regular meaning not extraordinary commissions from sales jobs or extremely high salaries like those of doctors, attorneys, and CEOs.

This is GOOD news for the high-income earner!

For most Americans, one’s desire, discipline, and intellect are more important factors in accumulating wealth than earning a high income.

The problem today among many high-income earners is that they think that money (income) is the MOST easily renewable resource.

What are 20 of the key findings of this book?