How the Economic Machine Works by Ray Dalio

By Michael George Knight — 3 weeks ago

How the Economic Machine Works by Ray Dalio

How the Economic Machine Works is a video made by Ray Dalio. It explains how the economy works in a capitalist system. I learned that the economy is governed by two cycles: the long-term debt cycle and the short-term debt cycle. These cycles depend on the amount of credit in the economy and the interest rates.

Ray Dalio is the founder and co-chairman of Bridgewater Associates, which, over the last forty years, has become the largest and best performing hedge fund in the world. He is the author of #1 New York Times Bestseller and #1 Amazon Business Book of the Year, Principles. Dalio has appeared on the Time 100 list of the most influential people in the world as well as the Bloomberg Markets list of the 50 most influential people. He lives with his family in Connecticut.

Summary of How the Economic Machine Works, by Ray Dalio

The economy is the sum of all the transactions made.

A transaction is made when one provides a good or a service against money.

Transactions are made by different actors: people, businesses, banks, and the government.

People, businesses, banks, and the government.

The government is the biggest spender.

It is composed of two parts: 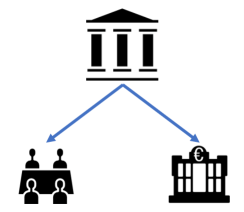 Money can be obtained from two sources: income (salary) and credit (borrowing money). 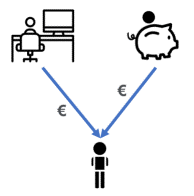 You get money through a salary, or by borrowing from the bank.

Your income depends on your productivity.

You can’t borrow money without earning money. The borrower must have an income that will let him repay, or he must possess a collateral that will be sold to repay the debt in case he cannot.

If the collateral loses value or if the borrower’s salary decreases, the borrower becomes less creditworthy.

It’s important to understand that the way the economy is structured is that one man’s spending is another man’s income.

One man’s spending is another man’s income.

When you spend to buy a beer, you enable the bartender to make a living.

However, it doesn’t matter much in the short term because productivity stays mostly flat and doesn’t really fluctuate (understand: people rarely increase their salary), so it doesn’t influence the economy much.

What influences it though, is credit.

Credit allows borrowers to get money now, and repay it later.

If you get money now, you will have more to spend.

When you spend more at the bar, the bartender increases his salary etc.

But we don’t want too much of it. 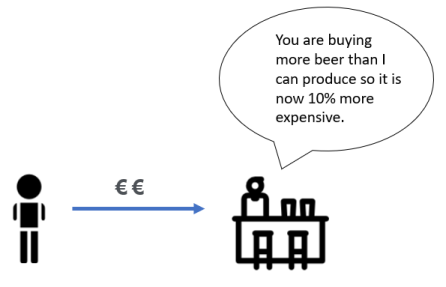 Eg: if the butcher is selling 10 steaks and there are 11 buyers, he will raise his prices.

So, it will prevent people from borrowing. To do so, it increases interest rates.

If they borrow less, they spend less, so the economy contracts a little.

But it’s not all.

At some point, debt has to be repaid.

To do so, borrowers need to decrease the amount of money they spend.

When people spend less, everyone is earning less.

People buy less, so prices go down. This is called deflation.

Economic activity decreases and we have a recession.

If the recession becomes too severe (understand: people are not buying enough) and inflation disappears, the central bank will lower interest rates again to get people to borrow and consume again.

As you can see, spending is constrained only by the capacity of lenders and borrowers to lend and borrow.

Notice how this cycle is controlled primarily by the central bank.

This short-term debt cycle lasts five to eight years and happens over and over. 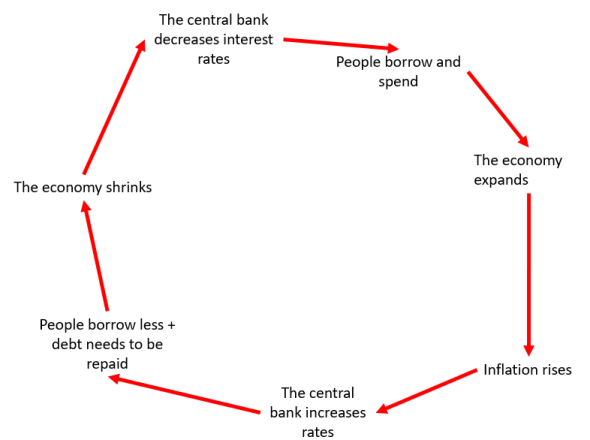 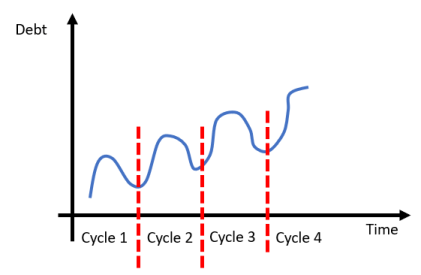 The level of debt as the cycles go.

Notice that at the end of each cycle, we finish with more growth, but also with more debt.

Because people love spending (and many of them never repay).

They have an inclination to borrow and spend more instead of paying back debt, it’s human nature.

Because of this, over long periods of time, debts rise faster than income, creating the long-term debt cycle.

Despite people becoming more indebted, lenders are always happy to extend credit. Why?

Everyone is buying stuff (goods, services, assets) with borrowed money.

When people do that, prices reach heights they shouldn’t.

We call it a bubble.

As long as salaries continue to rise, debt can be repaid, so asset value increases.

People borrow ever bigger amounts of money to buy these assets as investments causing their prices to rise even higher.

But this obviously cannot continue forever. And it doesn’t.

At some point, the need to repay debt grows faster than salaries, forcing people to spend less.

Since one man’s spending is another man’s income, incomes decrease.

This makes people less creditworthy, causing borrowing to go down.

Debt repayments continue to rise, which makes spending drop even further and the cycle reverses.

The rush to sell assets floods the market while at the same time, spending falls.

The stock market collapses, the real estate market tanks and banks get into trouble because they lent too much money.

As asset prices drop, the value of the collateral borrowers can put up drops which makes borrowers even less creditworthy. 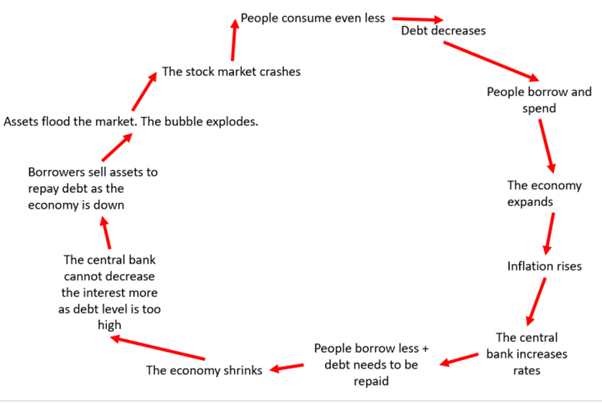 In a deleveraging, people cut spending, incomes fall, credit disappears, asset prices drop, banks get squeezed, the stock market crashes, social tensions rise and the whole thing starts to feed on itself the other way.

This appears similar to a recession but the difference here is that interest rates can’t be lowered for two reasons: first, they are already low.

Second, borrowers don’t want any more debt anyway because the debt burden is too big and they won’t be able to repay.

The lenders realize they have to stop lending.

The economy has become not creditworthy.

So, what do you do about a deleveraging?

You must decrease the debt burden and there are four ways to do that:

This is called austerity.

While we might expect the debt burden to decrease, the opposite happens.

When a borrower doesn’t repay the bank, people rush to the bank to withdraw money, banks get squeezed and people, businesses and banks default on their debts.

This severe economic contraction is a depression and a big part of a depression is people discovering much of what they’ve thought was their wealth is not there anymore.

Debt burden must therefore be lightened, which leads to the second point.

Many lenders don’t want their assets to disappear and agree to debt restructuring (changing the terms of the debt. Eg: paying less, paying more slowly, etc).

Even though debt disappears, debt restructuring causes income and asset values to disappear faster (because people are refunding their debt slower), so the debt burden continues to get worse.

All of this impacts the central government because lower incomes and less employment means the government collects fewer taxes, but it also means it needs to increase spending to care for the unemployed, to conduct daily business, and to create a stimulus plan.

Governments’ budget deficits explode. They need to find money somewhere, which leads to the third point.

Since governments need more money, they increase taxes on the rich and redistribute the money to the less fortunate. They resent the rich for being rich, while the rich resent the poor for having to give them their money.

Social disorder can break out, tensions can arise in and between countries.

Since most of what people thought was money was actually credit, when credit disappears, people don’t have enough money and are desperate for it.

Since the interest rate is already low, and no one wants to borrow money, we need to go to the last point.

Unlike cut in spending, debt reduction and wealth redistribution, printing money is inflationary and stimulative.

Inevitably, the central bank prints new money out of thin air and uses it to buy financial assets and government bonds, which drives asset prices up and makes people (that own assets) more worthy of credit.

With that money, governments can pay for social security and launch their stimulus plan.

While this increases people’s income and lowers the economy’s total debt burden, it increases the country’s debt.

This is very risky (especially for countries that import a lot from abroad).

Policymakers must balance the four ways that debt burdens come down.

If balanced correctly, there can be a beautiful deleveraging where debts decline relative to income, real economic growth is positive and inflation isn’t a problem.

It is achieved by having the right balance which requires a certain mix of cuts of these four methods.

But will printing money not trigger inflation? It won’t if it offsets falling credit (understand: as long as you don’t print more than the level of debt).

By printing money, the central bank can make up for the disappearance of credit with an increase in the amount of money.

However, printing money could easily be abused because it’s so easy to do and people prefer it to the alternatives.

The key is to avoid printing too much money and causing unacceptably high inflation.

If policymakers achieve the right balance, a deleveraging isn’t so dramatic, growth is slow but debt burdens go down. That’s a beautiful deleveraging.

Debt burdens finally begin to fall, people can spend more and the economy begins to grow again, leading to the reflation phase of the long-term debt cycle.

Deleveraging takes roughly a decade or more for debt burdens to fall and economic activity to get back to normal, hence the term “lost decade”.

So, in summary, there are three rules of thumb.

First, don’t have debt rise faster than income because your debt burdens will eventually crush you.

And third, do all that you can to raise your productivity because in the long run, that’s what matters most.