The first part of the book contains new discoveries about the brain’s emotional architecture that offer an explanation of those most baffling moments in our lives when feeling overwhelms all rationality. The second part of the book is on emotional intelligence: the ability to rein in emotional impulse; to read another’s innermost feelings; to handle relationships smoothly.

The tendency to act is implicit in every emotion (the root of the word contains the Latin “to move”).

The main emotions are:

We are biologically programmed to act out these emotions in a certain way, but our culture and life experiences dictate just how. For example, we all grieve after a loved one dies, but how we show our grieving — how emotions are displayed in private moments — is how we’re moulded by our culture.

There are two minds: rational and emotional. The more intense the emotion, the more dominant the emotional mind becomes. Our emotional mind is subject to “hijacking” — the limbic brain proclaims an emergency and triggers a reaction before our neocortex can process whether such action is a good idea. Our emotionally charged memories are also stored in a different part of our brain than ordinary facts. Bottom line: The emotional and rational parts of our brain need each other, they work in tandem. Emotions are key for good decision making, as dry logic alone sometimes can’t help us work through an unwieldy array of choices.

Academic intelligence has little to do with emotional life (no connection between grades or IQ and people’s emotional well being). People with high IQs can be stunningly poor pilots of their private lives. This doesn’t mean IQ is meaningless. Perhaps someone with a 500 on his Math SAT shouldn’t aspire to be a mathematician, but he could surely aspire to be a U.S. senator or make a million dollars, since the totality of other characteristics he brings to life dwarfs the SAT aptitude.

95 students from Harvard ‘1940 were followed into middle age and the men w/ highest test scores in college were not particularly successful compared to their lower-scoring peers, nor were they more productive or happy.

“Much evidence testifies that people who are emotionally adept — who know and manage their own feelings well, and who read and deal effectively with other people’s feelings — are at an advantage in any domain of life, whether romance and intimate relationships or picking the unspoken rules that govern success in organizational politics. People with well-developed emotional skills are also more likely to be content and effective in their lives, mastering the habits of mind that foster their own productivity; people who cannot marshal some control over their emotional life fight inner battles that sabotage their ability for focused work and clear thought.”

Howard Gardner’s theory of multiple intelligences is relevant here. He thinks that there’s not just one kind of intelligence crucial for life success, but many “personal intelligences.” The core of interpersonal intelligence, according to Gardner, includes the capacities to discern and respond appropriately to the moods, temperaments, motivations, and desires of other people. In intrapersonal intelligence, the key to self-knowledge, includes access to one’s own feelings and the ability to discriminate among them and draw upon them to guide behavior.

Male IQ – Adept in the realm of mind but inept in the personal world. Typified by a wide range of intellectual interests and abilities. He is ambitious and productive, predictable and dogged, and untroubled by concerns about himself. He also tends to be critical and condescending, fastidious and inhibited, uneasy with sexuality and sensual experience, unexpressive and detached, and emotionally bland and cold.

Male EI – Socially poised, outgoing, and cheerful, not prone to fearfulness or worries rumination. They have a notable capacity for commitment to people or causes, for taking responsibility, and for having an ethical outlook; they are sympathetic and caring in their relationships. Their emotional life is rich, but appropriate; they are comfortable with themselves, others, and the social universe they live in.

Of course, these are extremes. We’re all a hybrid.

Self awareness means being aware of both our mood and our thoughts about that mood. Typical thoughts bespeaking emotional self-awareness include “I shouldn’t feel this way,” “I’m thinking good things to cheer up,” and, for a more restricted self-awareness, the fleeting thought “Don’t think about it” in reaction to something highly upsetting.

Are you a “passionate” or an “indifferent”?

Imagine for a moment that you’re on an airplane flying from NY to SF. It’s been a smooth flight, but as you approach the Rockies the pilot’s voice comes over the plane intercom. “Ladies and gents, there’s some turbulence ahead. Please fasten your seatbelts.” And then the plane hits the turbulence, which is rougher than you’ve ever endured — the airplane is tossed up and down and side to side like a beach ball in the waves.

The question: What do you do? Are you the kind of person who buries yourself in your book or magazine, or continues watching the movie, tuning out the turbulence? or are you likely to take out the emergency card and review the precautions, or watch the flight attendants to see if they show signs of panic, or strain to hear the engines to see if there’s anything worrisome?

Which of these responses comes more naturally to us is a sign of our favoured attentional stance under duress. It assesses whether people tend to be vigilant, attending carefully to every detail of a distressing predicament, or in contrast deal with such anxious moments by trying to distract themselves. These two attentional stances toward distress have very different consequences for how people experience their own emotional reactions. Those who tune in under duress can, by the very act of attending so carefully, unwittingly amplify the magnitude of their own reactions — especially if their tuning in is devoid of the equanimity of self-awareness. Those who tune out, who distract themselves, notice less about their own reactions, and so minimize the experience of their emotional response, if not the size of the response itself. At the extremes, this means that for some people emotional awareness is overwhelming while for others it barely exists.

Damasio research suggests that role of feeling is critical to making decisions…emotional wisdom garnered through past experiences. Logic alone can’t decide what job to take or who to marry.

Our Emotional Well Being

Average our moods over weeks or months and we get our basic sense of well being. Most of us don’t feel extremely intense feelings — we hum along each day and fall into the gray middle range of intensity.

We have very little control when we will be swept with emotion or what emotion it will be. __We can have some say in how long an emotion will last__. There are some “mood purists” who believe we should experience what we feel. Some people try to shake bad moods (not terribly successfully, Goleman notes).

One of the best ways to lift your mood is to achieve a small triumph or easy success: tackling a long delayed chore, for example. Cognitive re-framing is also helpful (this sounds like Martin Seligman) — get perspective.

Three ways: a) minimize emotion (Japan style), b) exaggeration, and c) substitution (yes instead of no, in Asian culture). How well we display these emotions is a factor in our social competence.

Men vs Women — Women on average feel the fuller range of emotions and express them with greater intensity, hence they’re “more emotional” than men.

In one study of marriages men had a rosier view than the wives of just about everything in their relationship — lovemaking, finances, ties with in-laws, how well they listened to each other, etc. Wives in general are more vocal about their complaints than are their husbands. In bad relationships, when one partner screws up, the other blames it on the character of the person, not as a misdeed.

When a wife shows the facial expression of disgust four or more times within a fifteen-minute conversation, it’s a silent sign that couple is likely to separate within four years (study has made these predictions with 94% accuracy).

We’re often too frugal with praise and too willing with criticism. We need to increase our own awareness of our emotions (are we truly satisfied?) and get better at recognizing others’ emotions. Nothing may be more critical in leadership.

“It’s more practical to try to suppress the expression of bias rather than trying to eliminate the attitude itself; stereotypes change very slowly.”

The key to high group IQ is social harmony. The single most important factor in group productivity is not average IQ, but the group’s collective emotional intelligence.

Shout out to bookoutlines.pbworks.com for the written summary 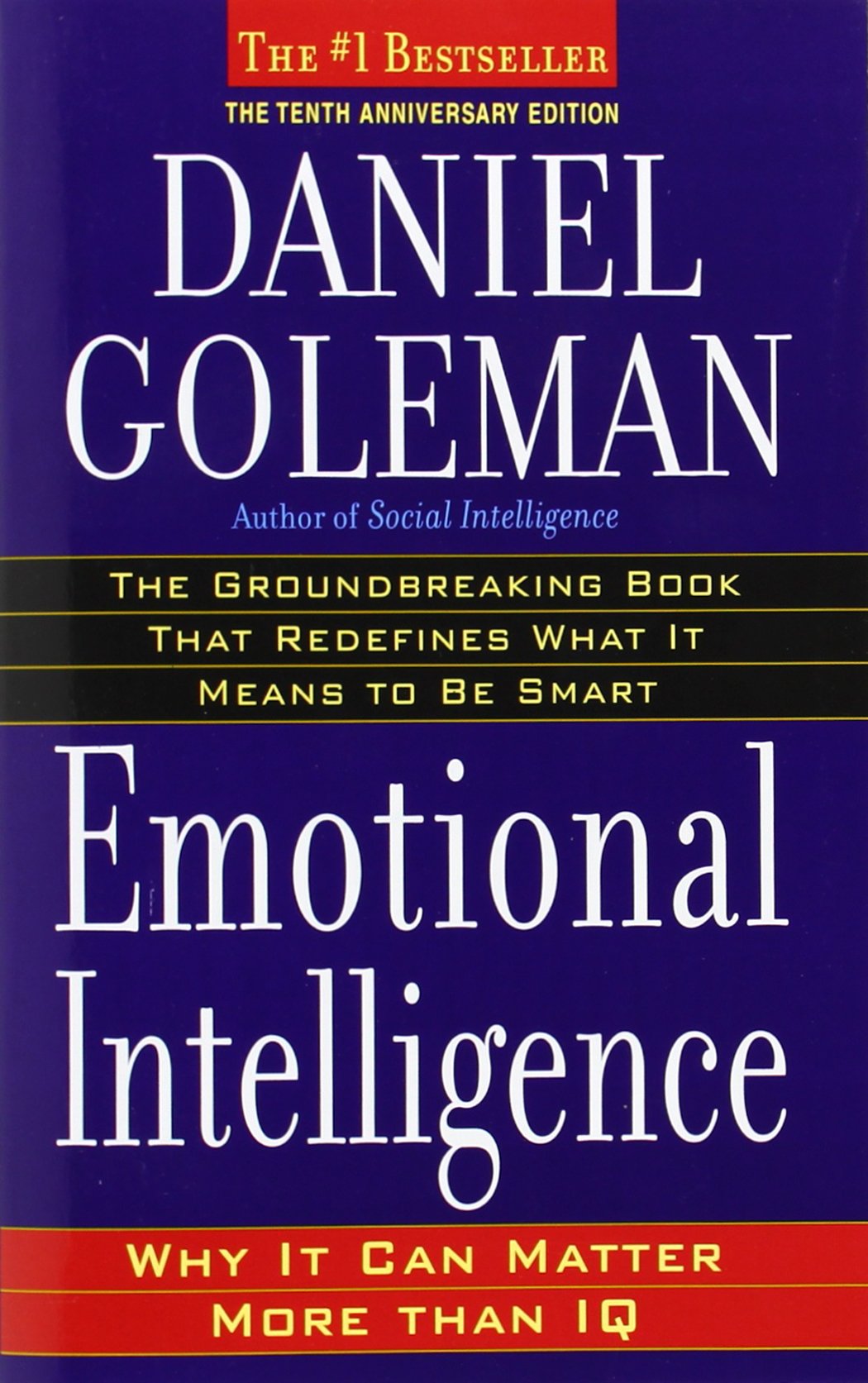