Difficult conversations are all those conversations we’d rather avoid such as complaining to a neighbor about their barking dog or asking for a salary increase at work.

The authors say that underlying difficult conversations are three deeper conversation, which are:

The authors say that the common mistake is to stop at what has happened at a superficial level. What we should do instead is to understand what interpretations of those events are and what is important to each party.

For a good resolution, the parties involved should move from their own views of the fact to a curiosity about the other person’s view of the events.

Don’t Assume They Meant it

The second common mistake is that people often assume to know what the other party’s intentions are. But they are often wrong because we base those assumptions on our own feelings. So if we are hurt, then we tend to believe the other party intention was to hurt us, and that’s often just not the case.
Also, there’s a certain tendency of going with the worst possible option, which certainly doesn’t help in conflict resolution. The simple solution is to ask the other party what was their intent.

And the third mistake is to assign blame, which can quickly escalate the situation and take us further from any resolution. The authors say we should instead focus on finding out how we all contribute to the situation.
Telling first our own contributions can help the other party move away from the natural tendency of blaming.

To expand your views on the contribution try to look at yourself from the other party’s shoes and then look at the whole situation from a third party perspective.

Expressing emotions openly is difficult for many of us. We tend indeed to avoid being too open about how we feel.

This is dangerous, the authors say, because unexpressed feelings tend to fester, find their way back into the conversation in nasty ways and prevent us from listening properly.
The solution is for all the parties to share their feelings openly and clearly. Don’t mistake them for facts, this is important, but don’t pretend that feelings are not there. Both their feelings and your feelings.

Some conversations are very tough because they inherently touch our own sense of worth. A job review for example, or talking about how to fix a big mistake.
The most difficult conversations can threaten our ego and sense of identity by calling into question our competency or even whether we are worthy of being loved and appreciated

The authors say it’s a human tendency of thinking in terms of all or nothing that can make the identity level of the conversation so touchy. We tend to think we are either great and everyone loves us, or we are terrible and unworthy.
The solution is in adopting the “And Stance” and ditching the “all or nothing” paradigm.

The authors say that there’s a relation between how easily we can admit our own mistakes and our own mixed intentions and how balanced (and strong) we will feel during the conversation. And the chances that it will go well will immediately rise.

The authors say that while many of us tend too often to avoid difficult conversations, sometimes it does indeed make no sense to have the conversation.
They suggest that working out on your own the three level of the conversation and drafting a “contribution map” will give you more insights and will also give you a better idea on whether it makes sense to have a conversation or if it’s mostly an issue that you have within yourself only -an identity crisis for example-.

The authors offer great advice on how to go about having the conversation. They say most people start by describing the issue from their own perspective, which automatically raises the defensive barrier from the other party.
The best way to go instead is with a “third story” perspective to describe the issue in neutral terms.

Example:
For example, in my case my neighbor always opens the window of the common building entrance area. I hate it during the cold reason as it’s expensive for the heating and unethical. Starting the conversation saying “you always open the window open and it’s very cold in here” is to start from my own perspective.
A third party approach instead would be “you prefer having the window open why I prefer having it closed during the cold season. I would like to find out why you want it open, explain why it’s important for me to close it and find possible solutions”.

Listening is what most don’t do and is one of the most important bit of difficult conversations. One the other party feels hear, it calms them down, makes them more likely to hear you and exponentially increases the chances of effective problem resolution.
The key to being a good listener is very simple: be genuinely curious and genuinely concerned about the other party. Ask questions, ask for examples and paraphrase what they said to make sure you understand.
You cannot move the conversation into a more positive and constructive stage until the other person feels heard and understood.

Each party must understand that their own views and feelings are just their own and there’s no wrong or right. Also, the personal views and feelings are no less -and no more- legitimate and important than any other party.
Don’t present your views as if they were the only truth, use the “and stance” and avoid any exaggeration such as “you always” or “you never”, which are a sure fire way of raising the other party’s defensive walls.

The authors rightly point out that the other party has likely not read Difficult Conversations, so they might remain focused on blaming and arguing on right and wrong.
They provide and detail some great tools. Reframing for example means taking the blame and accusation of the other party and reframing them in more positive terms for the discussion, for example as contributions. Naming the dynamic is another great technique. For example of the other party goes off track, for example by interrupting or refusing to admitting their own feelings, call the attention to that behavior and raise it as a point of discussion. The naming the dynamic technique will make the other person aware of their own behavior.

Your could for example tell them

“it’s not okay to only look at my contribution. I feel like I’m trying to look at the issue from both perspectives. Is there anything I’m doing to make it hard for you to look at your own contributions in the situation?” 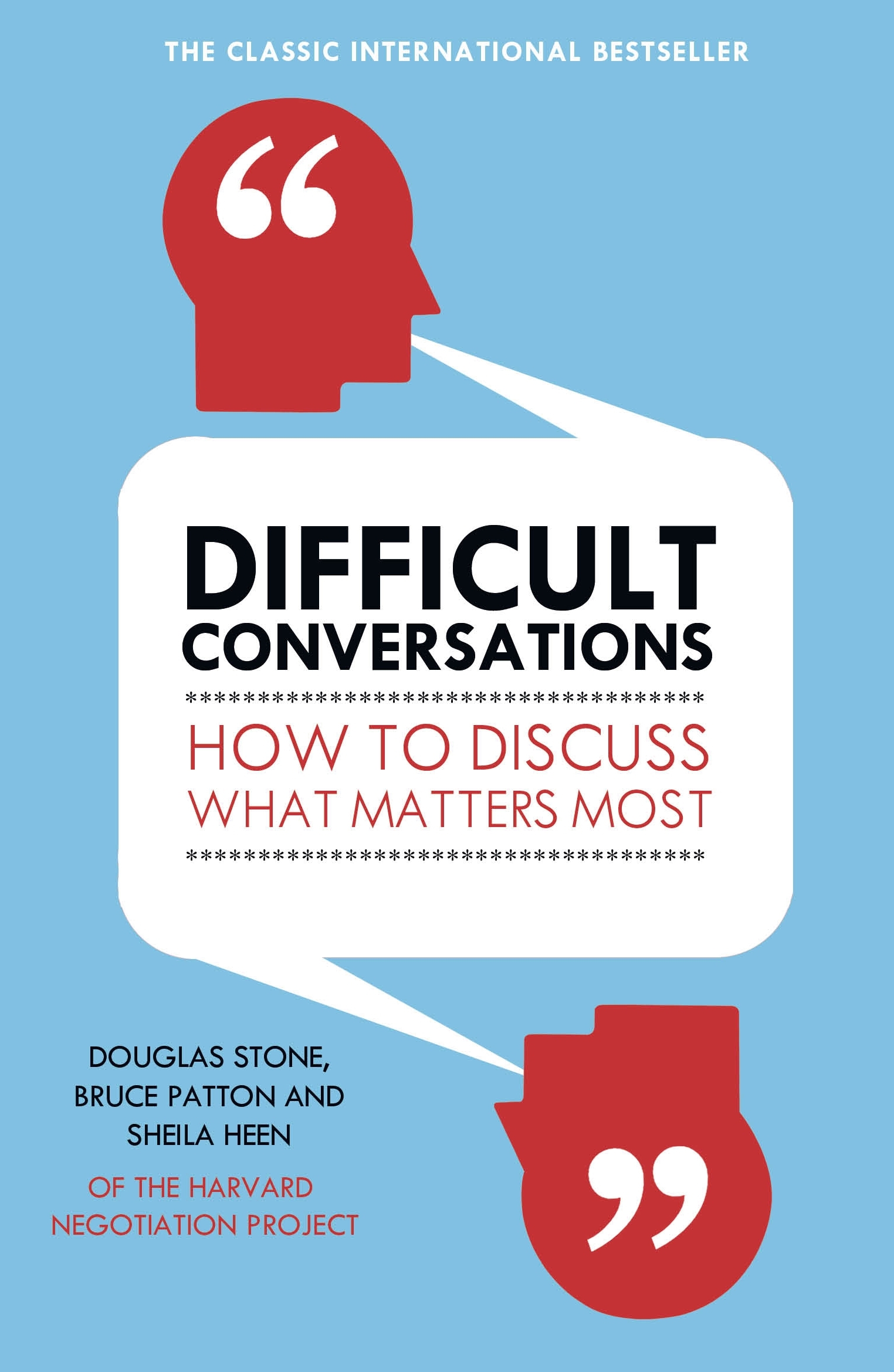