Rather than compete with Ringling Bros, Cirque du Solei created uncontested new market space that made the competition irrelevant.

In the red oceans, industry boundaries are defined and accepted, and the competitive rules of the game are known.  Here, companies try to outperform their rivals to grab a greater share of existing demand. As the market space gets crowded, prospects for profits and growth are reduced. Products become commodities and cut-throat competition turn the red ocean bloody.

Blue oceans, in contrast, are defined by untapped market space, demand creation, and the opportunity for highly profitable growth.  Although some blue oceans are created well beyond existing industry boundaries, more are created from within red oceans by expanding existing industry boundaries, as Cirque du Soleil did. In blue oceans competition is irrelevant because the rules of the game are waiting to be set.

It will always be important to swim successfully in the red ocean by out competing rivals. Red oceans will always matter and will always be a fact of business life. But with supply exceeding demand in more industries, competing for a share of contracting markets, while necessary will not be sufficient to sustain high performance.  Companies need to be beyond competing. To seize new profit and grown opportunities, they also need to create blue oceans.

Put the clock forward twenty years, or perhaps 50. How many now unknown industries will likely exist then?  If history is any predictor of the future, the answer is “a lot”.

In our research we found that 86% of launches were line extensions (incremental improvements within the red ocean of existing market space). They accounted for 62% of total revenues and a mere 39% of total profits.

Value innovation is the corner stone of blue ocean strategy. Instead of focusing on beating the competition, you focus on making the competition irrelevant by creating a leap in value for buyers and your company, thereby opening up new and uncontested market space.

Value innovation places equal emphasis on value and innovation.  Value without innovation tends to focus on value creation on an incremental scale, something that improves value but is not sufficient to make you stand out in the marketplace.  Innovation without value tends to be technology-driven, market pioneering, or futuristic, often shooting beyond what buyers are ready to accept and pay for.

Cost savings are made by eliminating and reducing the factors an industry competes on.  Buyer value is lifted by raising and creating elements the industry has never offered.  Over time, costs are reduced further as scale economies kick in due to the high sales volumes that superior value generates.

Cirque du Soleil created a blue ocean of a new, uncontested market space that so far has no agreed-on industry name.

Effective blue ocean strategy should be about risk minimisation and not risk taking.

The four key questions to challenge an industry’s strategic logic and business model:

Rarely do sellers think consciously about how their customers make trade-offs across alternative industries.

For example, NetJets strategic question was: Why would corporations choose one alternative industry over another?  By focusing on the key factors that lead corporations to trade across alternatives and eliminating or reducing everything else, NetJets created its blue ocean strategy.

Corporations choose commercial airlines for only one reason: costs.  So NetJets offers its customers one-sixteenth ownership of an aircraft to be shared with fifteen other customers, each entitled to fifty hours of flight time per year.  Customers get the convenience of a private jet at the price of a commercial airline ticket.

At its inception, Curves was seen as entering an oversaturated market, earning its offering to customers who would not want I and making its offering significantly blander than the competition’s. In reality, however, Curves exploded demand in the U.S. fitness industry, unlocking a huge untapped market of women struggling and failing to keep in shape.  Curves built on the decisive advantages of two strategic groups – traditional health clubs and home exercise programs and eliminated or reduced everything else.

Path 3: Look across the chain of buyers

In most industries, competitors converge around a common definition of who the target buyer is.  In reality, though, there is a chain of “buyers” who are directly or indirectly involved in the buying decision.  Purchasers, users, influencers.

Untapped value is often hidden in complementary products and services.  The key is to define the total solution buyers seek when they choose a product or service.  A simple way to do so is to think about what happens before, during and after your product is used.

Babysitting and parking the car are needed before people can go to the movies. Operating and application software are used along with computer hardware. In the airline industry, ground transportation is used after the flight but is clearly part of what the customer need to travel from one place to another.

To the kettle industry, the water issue was not its problem. It was the problem of another industry – the public water supply.

Philips created a kettle having a mouth filter than effectively removed the lime scale as the water was poured.

Path 5: Look across functional or emotional appeal to buyers

iTunes broke a key customer annoyance factor: the need to purchase an entire CD when they wanted only one or two songs on it.

What trends have a high probability of impacting your industry, are irreversible, and are evolving in a clear trajectory? How will these trends impact your industry? Given this, how can you open up unprecedented customer utility?

To reach beyond existing demand, think non-customers before customers; commonalities before differences; and de-segmentation before pursuing finer segmentation. 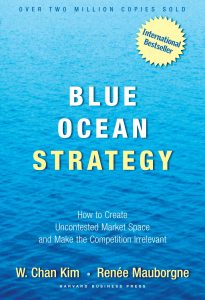