Stand Up Straight With Your Shoulders Straight

Jordan Peterson says dominance hierarchies have always existed. And our brain is hardwired to keep track of our social status in the social hierarchy and to vie for social status
When we lose social status battles our serotonin drops low. People low on serotonin are more likely to be sad and depressed, and they become easier targets and preys.
Which is adding insult to injury, the author say, since people at the bottom of the pyramid are also more likely to live in an environment with plenty of predators. The bottom of the pyramid is indeed rich in drug addicts, mentally ill and criminals.

The author says naive people have too rosy of an outlook on the world. They believe people are mostly good, but they invite abuse because abusive people prey on the weak and naive.

Aggression Can Be Good

Jordan Peterson says a common misconception is that any signs of aggression are wrong. People who buy into that paradigm block within themselves any aggressive emotions.
But psychological forces are never uni-dimensional, the author says. And aggression does not necessarily translates into cruelty and destruction. Aggression is also channeled into good causes. Like for example, Jordan says, speaking the truth, pushing back against oppression and forging ahead in difficult times.

Jordan references his own experience in practice. He says that when naive people discover the capacity for anger within themselves, they are shocked. But when they see themselves as dangerous (at least potentially) their fear also decreases. And they develop more confidence and self-respect.
They see in themselves the ability to withstand aggression and evil, because they can muster the same within themselves. At that point, they might be able to begin resisting oppression.

The author then goes one step further when he says:

There is little difference between the capacity for destruction and strength of character. This is one of the most difficult lessons of life.

The author finally encourages you to take a spot in the dominance hierarchy. To put your desires forward because you have the right to them as much as anyone else. Get some serotonin flowing. Stand up to evil and take care for the people dear to you.

Why To Stand Straight:

Peterson says there’s a connection between your body and how you feel and see yourself.
And in his usual hyperbolic gab Peterson says standing straight is the first step to emerge from our childhood paradise free of threats. Standing straight means accepting adulthood and responsibility.

Jordan Peterson says you ought to ask yourself “what might my life look like if I were caring for myself properly”?
The author urges the readers to also take a look to the future. Think about where you’re going and what that will mean, so that you will not end up unhappy and resentful.

Carlo Rogers says it’s impossible to convince someone to change and improve. The desire to improve is indeed a precondition for progress, says the author.
Peterson says some patients of his lie to themselves. They stay in unhealthy relationships because they are too weak to leave. But they tell themselves they stay because they’re good persons. Not so.
It’s a good thing, not a selfish thing, to choose people who are good for you, he says.
And you are not obliged to give your loyalty to people who are making the world a worse place. You are actually morally obliged to choose people who want to make the world a better place.

The author talks about the famous invisible gorilla experiment and says that our mental resource are limited to what we pay attention to. That means that we really see what we focus on.

The author says that some parents shy away from using some tough love with their children. But all the pain the parents try to take away is not going to prepare the children to the pain they will eventually face in the real world.
Quite the opposite: the judgement and pain the world will unleash on the unprepared will be far harsher and crude. So the choice is either disciplining and preparing your children, or let the world do it for you later on. And the world will demand a higher price.

The author says that when strictly necessary, it’s also OK to hit a child. He says that a no that cannot be backed by some sort of educative action means nothing.

The third point was the most interesting and eye opening for me. He says that no adult human could tolerate being dominated by an upstart child.
If you let your child humiliate you in public or get away with openly defiant behavior, you will harbor resentment. And that will call for revenge later either directly or indirectly.

Set your house in order means to work on yourself before you think about anything else. It means to focus on what you can change and what you can do, instead than wasting time on everything that’s wrong.

The author also says good can win upon evil, even when evil leaves a mark. Abused children are not likely to abuse their own children, for example.
And they can always choose how to channel their bad experience to do good.

Pursuing what’s meaningful is to forego instant gratification to build a better future. Today’s sacrifice will forge your character and provide tomorrow’s reward.

But that would be too simple for a writer like Peterson. He says meaning happens when you speak the Truth and are guided by Love. And nothing takes precedence over that.
Like for Aristotle, pursuing what’s meaningful gives you the strength to die for your ideals in contentedness.

Jordan Peterson says that lying is the easy way out. The truth is the path of the courageous ones and those seeking a meaningful existence. The easy way out or the truth are not just difference choices, but they are two wholly different paths through life.

The Lies Out of Fear

The author says that lying and acting on lies is a betrayal of yourself. And when you fail to put forward your real you, you are weakening your character.
And a weak character is at the mercy of life’s adversities.

Another way of lying is saying yes when you are afraid of saying no. But the more you forego your real feelings, the harder it will be to defend them when it really matters for you.
On the other hand if you make yourself a person who can say no to people, you also become someone who can say no when a no is called for.

The authors then talks about people who lie to gain advantages in life. He says these people tend to grow a sense of superiority from the fact they can dupe the people around.
“Everyone is fooled, everyone is stupid except of me”, thinks the liar.

Peterson here talks about the tendency of many to speak more than they listen.
He also goes a bit into conversations and lists some common mistakes:

Making Sure Everyone’s On The Same Page

I particularly liked a technique Peterson uses when he wants to make sure everyone understands each other. Basically the person who has to reply will first summarize what the other said in a way that is satisfactory to the person who just spoke.
I think that’s a simple but genius technique to make sure people never fail to understand each other in delicate conversations.

Being precise in your speech also means being precise in looking at the world around you.
Many prefer to shield themselves from reality so they can keep living a dream. Or because they are scared reality will confirm the fears they would rather not face.
But reality is often better than our own imagination. And even when it isn’t, at least you have a chance of changing things when you finally face them.

Like Ray Dalio in his seminal book Principle says, love reality even when it hurts.

The author says it’s not true that gender is a social construct. It’s not, and it’s not a debate because data proves it. And trying to culturally change that by removing masculine traits is bad for everyone.

Women’s Success Is Their Own Undoing

The differences in genders are helping women becoming more successful than men in the modern world. Peterson reaches that conclusion mostly by looking at women’s growing university attendance
This might sound like good news for women, but it’s not. Women tend to marry on their same level or above their economic dominance hierarchy (contrary to men who are content of marrying across or below their status).
This dynamic creates a difficult environment for women to find a suitable mate.

Women Win In Both Hierarchies

Peterson say women can win playing in both women’s hierarchies and male hierarchies. But men can only win in the male hierarchy because they would lose status being good at what women value.

The author say the modern drive of raising boys like women is not helping to anybody. A male trait like aggression also underpins the drive to be outstanding and virtuous. Aggression does have utility and value, when properly channeled. At the very least, it’s necessary for self-protection, says the author.
Note: that aggression must be properly channeled though, says Peterson. Aggressive children who don’t rein in their temperament are doomed to social rejection and unpopularity.

Lack of Aggression in Women

Peterson says many of the women in his clinic experience problems in their families and jobs not because they’re too aggressive, but because they are not aggressive enough.
For these women, they use assertiveness training.

The Dark Side Calling

The author says that when softness become the only socially acceptable virtue, then dominance and violence start becoming unconsciously appealing.
This is, he says, one of the reasons for the rise of fascist political parties. And part of Trump’s appeal

In the last chapter Peterson deals a bit with life being hard and difficult at times.
But abandoning oneself to nihilism and hatred is not the answer. There’s nothing there, he says, it only perpetuates and spread more evil and pain.
He proposes instead to look for the beauty in life. Including, for example, patting a cat when you see one. 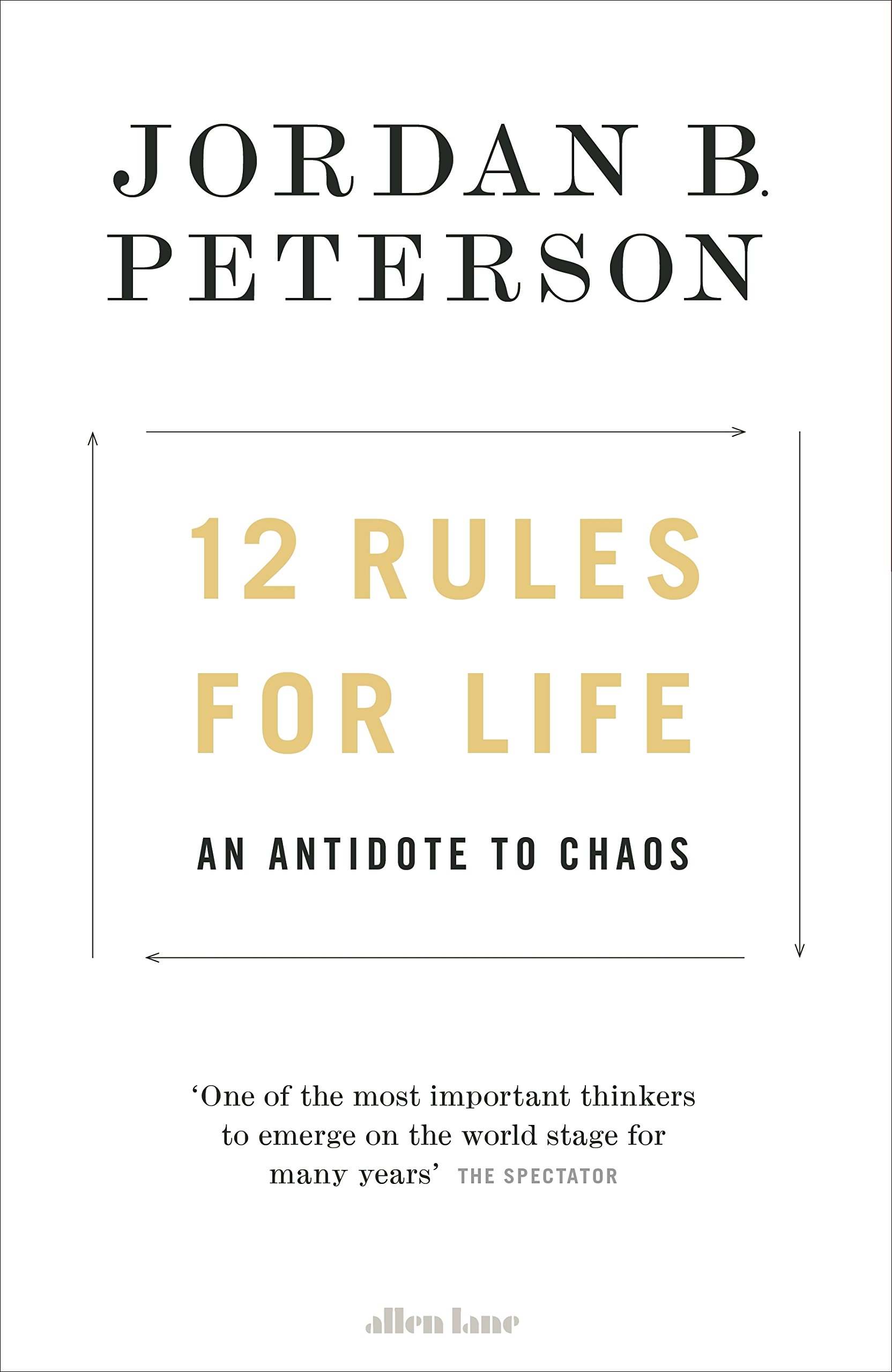